Windstorm damage to houses results in extensive property damage and extremely costly
insurance claims. Among the several failure mechanisms from wind that lead to water
damage and significant insured losses, the failure of roof deck attachment is a major
consideration. The loss of roof deck panels (e.g. OSB, plywood) during a high wind
event like a hurricane, quickly leads to extensive water damage to the building and its
furnishings. Insurance claim data shows that once a roof deck fails even partially, a
house becomes a major loss.

There are several practices which can be used to increase the strength of the roof deck to
roof frame connection. One such practice is the use of adhesives to increase the uplift
resistance of roof deck panels, which is the focus of the current ASC research project.
Further, incentives in the form of premium discounts are emerging in hurricane-prone
areas to encourage the use of such mitigation practices. This paper summarizes such
incentive programs in several states in the southeast U.S.

Florida
Since Hurricane Andrew struck in 1992, Florida has taken the lead in adopting regulatory
provisions related to hurricane resistant construction. Shortly after Andrew, Florida
Statute 627.0629 was adopted to require residential property insurance providers in
Florida to provide “discounts, credits, or other rate differentials, or other appropriate
reductions in deductibles” for residential properties where construction methods that have
been shown to reduce loss caused by windstorms are employed. Incentives are required
to be offered for mitigation techniques that address “roof strength, roof covering
performance, roof-to-wall strength, wall-to-floor-to-foundation strength, opening
protection, and window, door, and skylight strength.” Insurance providers are required to
provide a percentage discount range for the mitigation measure to the Florida Office of
Insurance Regulation to be available to homeowners.

In the years since Andrew, changes have been made to continue to improve the hurricane
resistance of homes. This is done predominately through building codes for new homes
and through insurance incentives for existing homes. The Florida Department of
Community Affairs and the Florida Office of Insurance Regulation are both active in
these arenas, and their efforts as related to insurance incentives are summarized below.
Incentives for Wind Damage Mitigation Measures 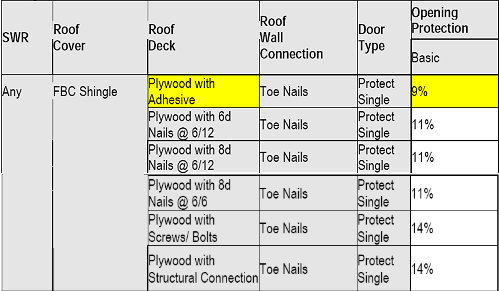 In the table above, various factors affecting wind mitigation are presented, such as
Secondary Water Resistance (SWR), type of roof covering, roof deck connection
methods, door type, and type of opening protection. For the example house described by
the inputs, the output indicates that the use of plywood with adhesives (in addition to
nails) to fasten the roof decking to the framing would result in a discount of 9% on the
wind portion of the total insurance premium. The wind portion of a homeowner’s
premium is anywhere between 15 and 70% of the total premium depending on the
location in Florida. The entry of “any” for the SWR in the table above indicates that the
insurer does not account for this factor in determining premium discounts. This
particular example is based on data supplied by State Farm Insurance of Florida. A user
can examine similar information for any insurer active in Florida, and can also cross
compare discounts offered by different insurers.

Impact of Incentives
Until recently, the guidance on the magnitude of incentives was limited to a general
percentage range. E.g. if a homeowner applies mitigation measure X, then he will
receive a 10-40% discount on the wind portion of the insurance premium for the house.
This level of information does not support decision making on mitigation measures,
because actual dollar figures are not provided.

The Office of Insurance Regulation has successfully lobbied for a change in the way
incentives for wind mitigation measures are provided by insurance providers. Recently,
the Florida Financial Services Commission passed a rule requiring insurance providers to
supply specific information on the value of individual wind mitigation measures based on
an individual home’s location, age, construction methods, and materials. This rule went
into effect in March 2007, and should provide actionable data for homeowners that will
let them decide the cost/benefit of implementing various wind mitigation measures.
However, it still appears that a homeowner must directly engage their provider to get
actual dollar amounts of discounts.

It is also unclear how broadly the mitigation incentives are being widely used by
homeowners. From conversations with DCA we were told that no broad PR campaign
has spread the word about the incentives. We have also been told by groups involved
with incentives that homeowners need to be very specific when talking to their insurers
about the discounts, or else the customer service representative may not understand the
request and find the appropriate information in their database.

Home Structure Rating System
ASC Adhesive Systems for Roof Assemblies – Insurance Incentives Summary 4
HUD PATH Contract No. H-21521CA
The University of Florida is currently under contract with the State of Florida’s Office of
Insurance Regulation to develop a Home Structure Rating System that will allow
homeowners to obtain an objective hurricane resistance rating of their home and
determine the effect of various mitigation measures.1 The contract was issued to fulfill
the requirements of Section 39 of FL SB1980, passed in 2006. Other participants in the
development of the rating system include the Florida Department of Community Affairs,
the Federal Alliance for Safe Homes, the Florida Insurance Council, the Florida Home
Builders Association, the Florida Manufactured Housing Association, the Risk
Management School at Florida State University, the Institute for Business and Homes
Safety, and Mercedes Homes of Central Florida. Input variables for the Home Structure
Rating System will include home location, age, and construction methods. Mitigation
measures that will be evaluated within the Home Structure Rating System include:
• Roof deck attachment
• Secondary water barrier
• Roof covering
• Bracing gable ends
• Reinforcing roof-to-wall connections
• Opening protection and
• Exterior door protection (garage door included)
The inclusion of roof deck attachment mitigation measures could spark interest from the
public in the use of adhesives, should the cost benefit analysis of this mitigation measure
prove favorable. The system and outreach materials are currently under development and
are expected to be delivered in May 2007.

Summary
Florida’s property insurance companies were the first in the nation to offer incentives for
wind mitigation techniques that are based on individual features.2 Florida’s statutes have
required insurance providers to incentivize wind mitigation practices which are shown to
reduce property loss caused by windstorms since 1994. The amount of the incentive
varies according to risk associated with the geographical location, building materials, and
construction methods of each home as well as actuarial data from individual insurance
companies. Within this established regulatory framework, there appears to be great
opportunity for recognition of both new and retrofit applications of adhesives for
increasing the uplift resistance of roof sheathing to roof framing, especially if previous
and future tests can be used to substantiate the increased structural integrity provided by
this application.
Other Gulf Coast States lag behind Florida, but there is clearly growing regional interest
in establishing programs which will give homeowners and builders incentives to apply
mitigation techniques. Depending on each state’s regulatory framework, such programs
may be optional or insurers may be required to offer mitigation incentives.
2 “Florida Hurricane Loss Mitigation Program Report to the Florida Legislature”. Florida Department of
Community Affairs. Jan 2002. http://www.floridadisaster.org/brm/RCMP/files/legreport.PDF. Accessed
7 Nov 2006.

There are no ways around it. In order to know ALL of the issues you may face when purchasing the biggest investment you will probably ever make in your lifetime, you need to hire a home inspector.

If you live in Florida, you are surrounded by water and face some of the world’s most fierce storms.

The hurricane seasons bring really heavy rains and strong winds. These storms affect everyone and cause damage to homes. That damage can be just the beginning.

If you need a quick turn around on your home inspection, we are for you. Your report is printed immediately upon the conclusion of the inspection...including photos!